Secrets of the Riverview Inn 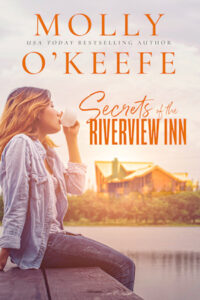 A job at The Riverview Inn offers Delia a safe place to hide with her daughter—and the chance to salvage their damaged relationship. But when her secrets follow them, she has to make the most difficult choice of her life.

Delia has made some mistakes. Maybe more than other women, other mothers. She just needs a little time to regroup and figure out what’s best for herself and eight-year-old Josie. But The Riverview Inn and her job there as a massage therapist offer her something she never expected—happiness.

Working at the inn gives her purpose, friendships, and an exciting and forbidden attraction to the mysterious Max Mitchell.

The only problem is—she’s lying. About everything.

But she isn’t the only one with secrets. There are things Max isn’t telling her about his past. And one guest is hiding something that could destroy everything at The Riverview Inn.

SECRETS OF THE RIVERVIEW INN is a revised reissue of A MAN WORTH KEEPING, published April 2008 in Harlequin SuperRomance #1486.