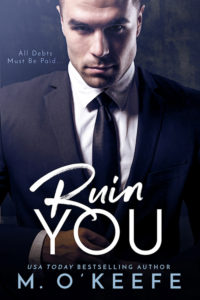 The only thing that stands in the way of my revenge is her.

The lying scheming daughter of the man who killed my parents. She has the secrets I need to bring down her father.

And I’ll do anything to get them. I will lie to her. Steal from her. Use her.
Ruin her.

It helps that our chemistry is explosive.

What I’m not expecting is for her to be so sweet. And so strong.

After so many years of lying and hiding, I finally have a place to call home. With people I can call a family. The Paintbrush Inn is my life now, and I won’t let anyone ruin it.

When sexy and world-weary Simon checks in to the Inn, I never expect him to glance my way. I’ve spent my whole life blending into the background. Being overlooked and ignored. It’s been helpful, even though it’s lonely. And he’s way out of my league.

But our attraction is powerful. Undeniable.

Because I can’t let anyone close. If the secrets I keep were to be revealed, my whole life would be destroyed.  But something about Simon makes me break all my own rules. I’m letting him in to my home, my body, my life, never expecting he has his own secrets.

When the truth comes out, we’ll both be ruined.