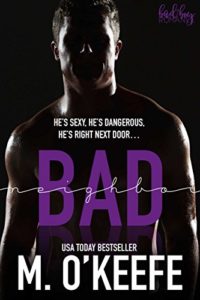 I gave up everything to save my sister from a monster, and now I’m lying low in this rundown apartment so I can stay out of danger. Hiding from everyone.

Except for the guy in apartment 1A.

He’s rude. Silent. Muscled, mysterious, and hot as hell. I don’t know if he likes me or hates me, but the more time I spend with him, the less it matters.

And for the first time in my life I’m going to go after what I want.

She doesn’t belong in my world.

From the second 1B moves in, I know she’s keeping secrets. She doesn’t belong here, much less with a street fighter like me.

But that doesn’t stop me from craving her. Her softness and sweetness. She’s a drug, and suddenly I’m addicted.

I know someone is going to try and hurt her and I can’t let that happen. But unless I push her away and get her out of my world, that someone could be me…